Hawai’i, the Happiest State in the U.S. 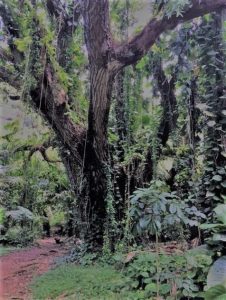 Travel and Leisure Magazine just reported, according to a Gallup Poll, Hawai’i has been named the happiest state in the country for the sixth year in a row. Cailey Rizzo reports that states with more access to nature generally tend to be happier. http://www.travelandleisure.com/trip-ideas/yoga-wellness/happiest-states-2017

Inspired to get my happy on, a hike on the Moanalua Hike Trail was in order this weekend. To my delight this was no ordinary hike, it runs deep with history. There are remnants of an abandoned home once owned by the Damon family and Hawaiian petroglyphs near one of the ancient bridges along the river flow of the valley. The ahupua’a* of Moanalua was established as a center of hula and chanting during the reign of Oahu’s King Kakuhihewa in the 1600s.

The Gallup Poll is right…access to nature is my #happyplace!

*An ahupua’a is a complex system of land division used by ancient Hawaiians. It’s a wedged area of land running from the uplands to the sea providing each community the resources it needed to be sustainable.

Contact Makana Corporate Rewards for the perfect gift for your Hawai’i nature lover.